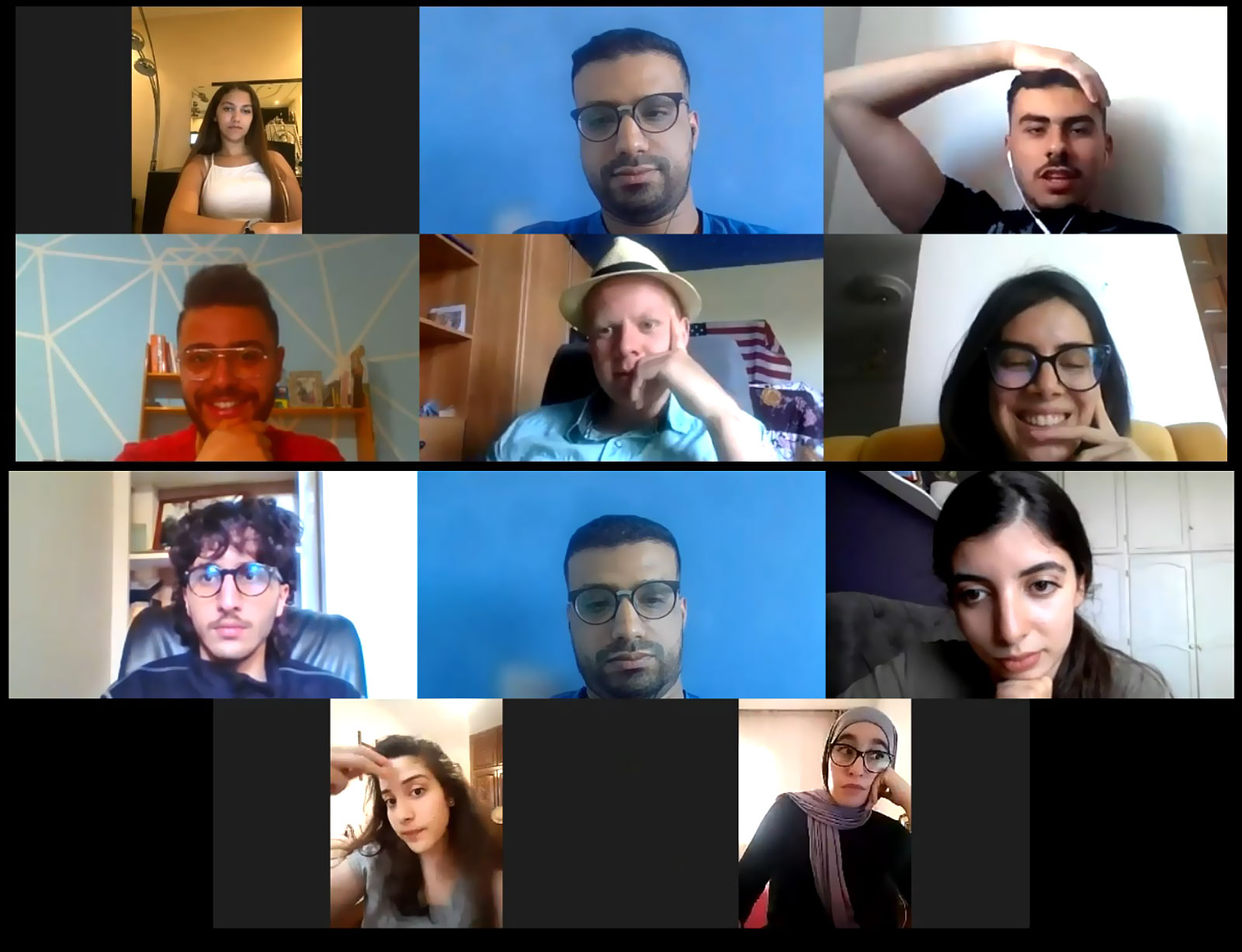 Presented by: Fares, Melissa, Maria and Chanez from ALEJ
Moderated by: Naceur from ALEJ and Nassim from ADEEJ
Participants: We love Sousse, Solijugend, ADEEJ and ALEJ

The workshop took place on May 27th at 3pm (Algerian and Tunisian time) and 4pm (German time) via zoom platform. 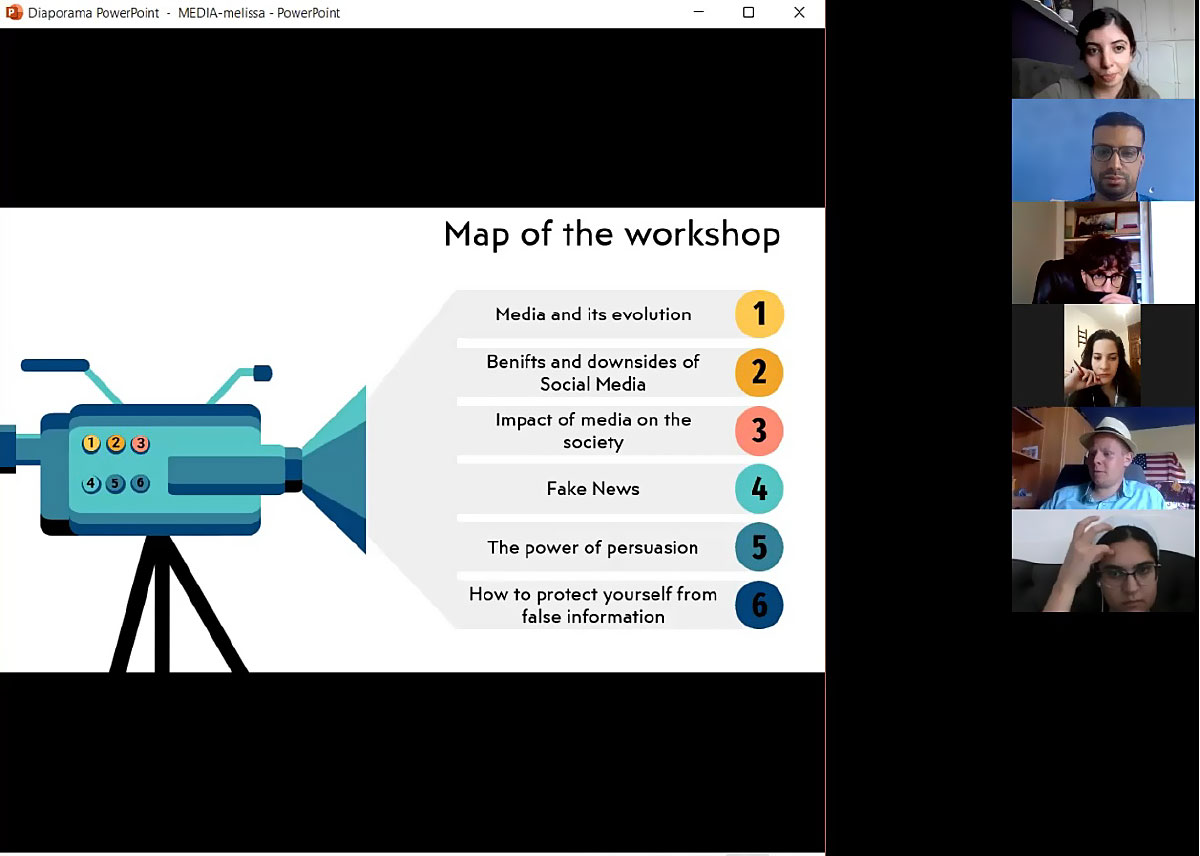 The members of ALEJ started by an icebreaker activity where Melissa divided the participants  into breakout Rooms. She asked the following questions:

– Your top 3 of your bucket list
– Your favorite hobby
– What was the number 1 song in the charts the year you were born?
–  If you should keep the same age all your life, which one would you like to choose?
– If you would have a superpower, which one would it be?
– Who do you admire?
– What did exist when you were a child that no longer exists today?
– Do you have a favorite quote?

Fares then announced a brainstorming and Word Cloud, asking the participants what came to mind when thinking of the word media:

The highest percentage was for social media as it’s the trendiest way to get informed. 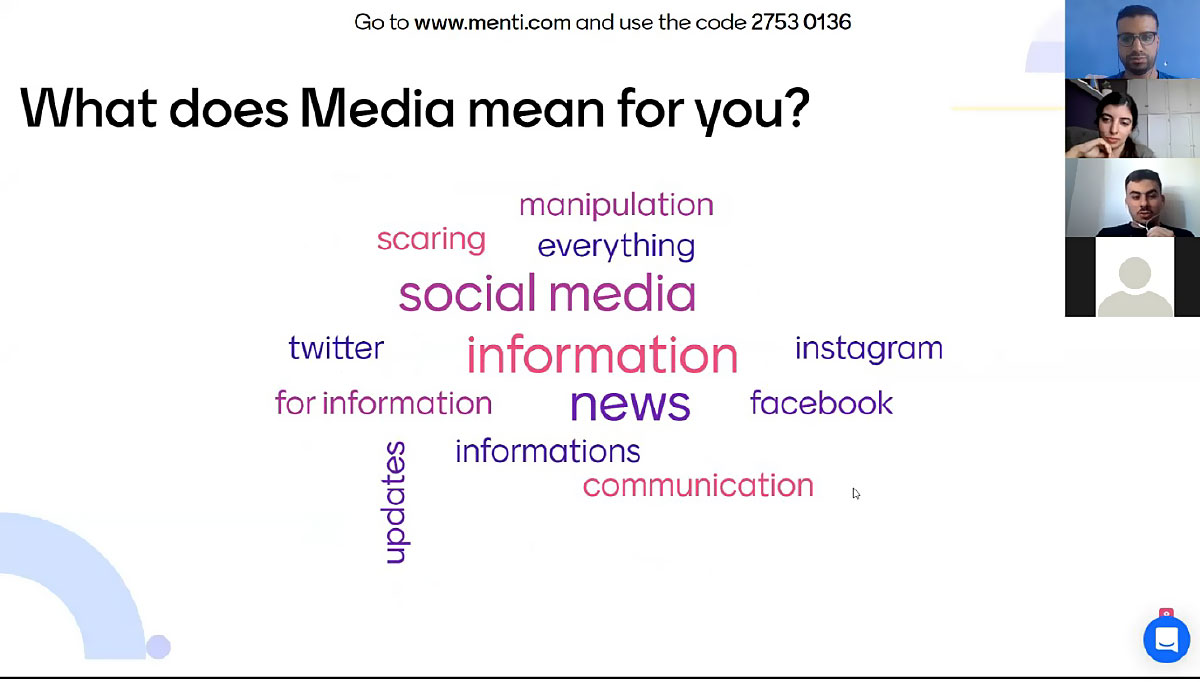 The participants were then divided into break out rooms to exchange ideas about the advantages and the downsides of Media, which was informative for all of us. Among other things the participants mentioned that it could harm self-esteem following trends on Instagram.
Fares then continued by highlighting the evolution of Media. 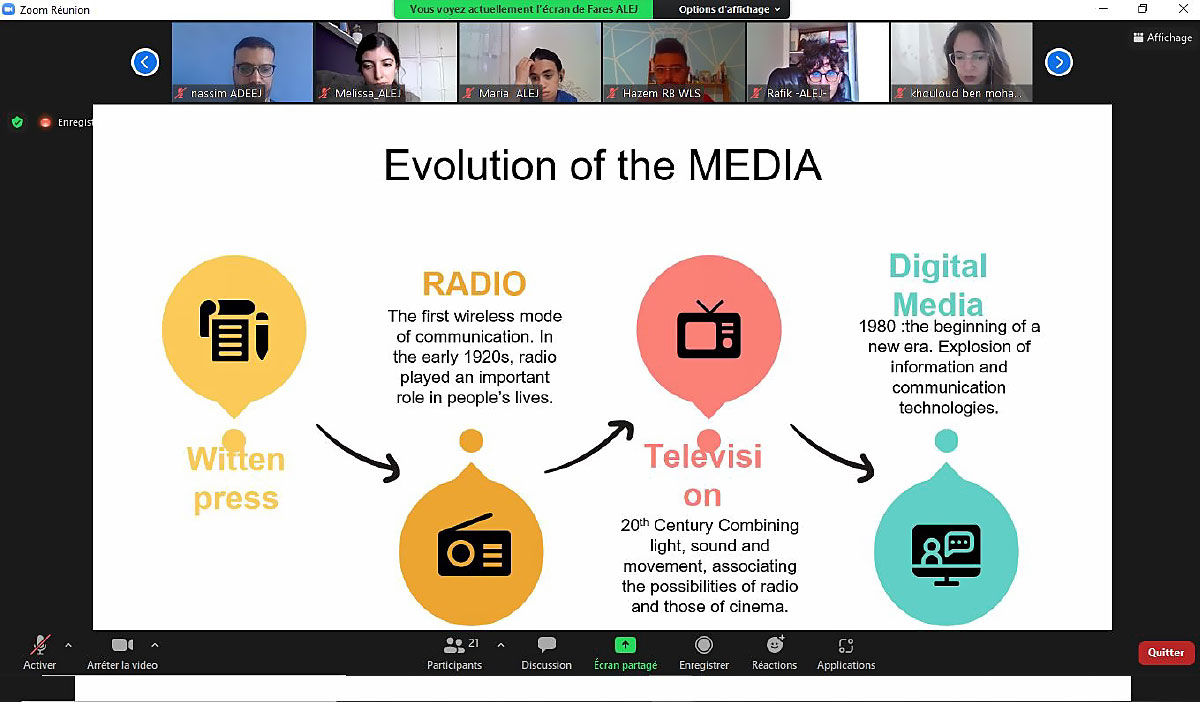 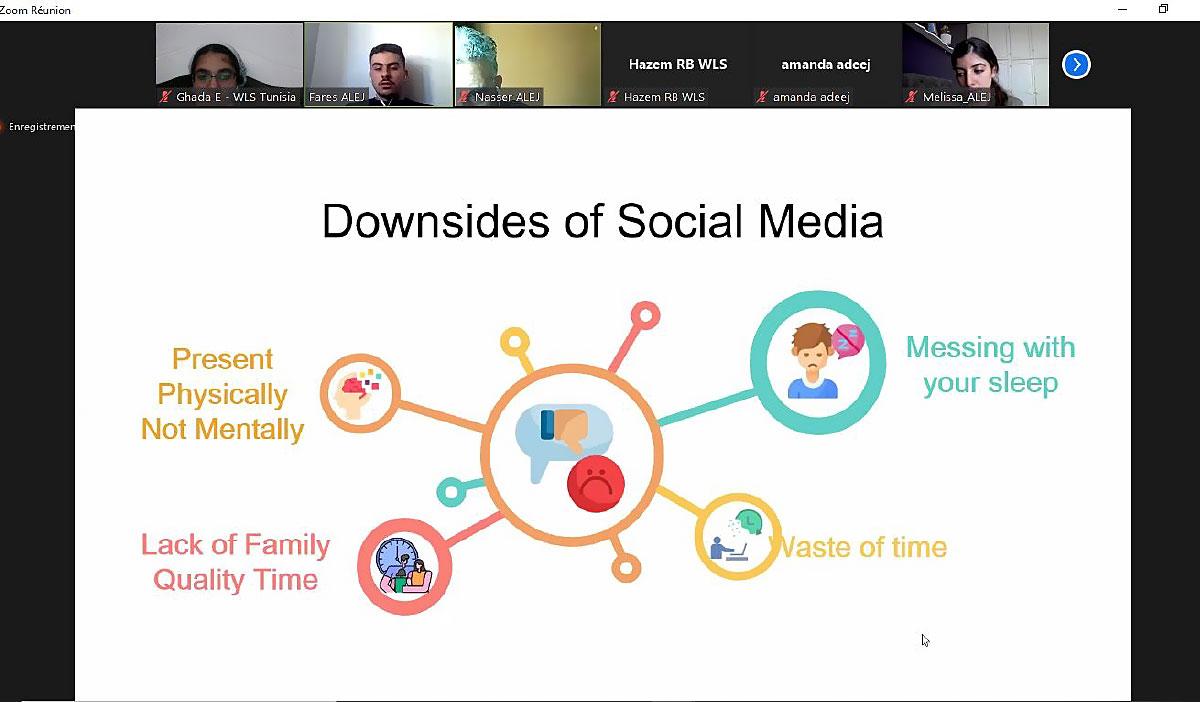 Maria took over the second part and took conducted a survey:  are we manipulated by media?

To this question, participants were unanimous, then she mentioned how the human connections and relationships nowadays are changing. To put forward this idea she compared an image (1980  and 2019) where kids used to have such a free childhood to enjoy in contrast to millenium kids sticking  to their phones only (2nd picture)

She added also how it influenced everyone in the case of “Rwanda Genocide media exposure” in 1994. A look at the book of “Miraculée “ talking about a survivor of the war, where Radio was the only source of information back then and manipulated the audience by offering the viwers a biased content.

A game called: “We become what we behold”, was a funny way to see how the player will catch news and show it to others,  with a discussion in break out rooms : How the media agencies will inform  audience , how it can work for political causes in some ways , how it is a blurry image to be considered etc. …

Also we can notice that media delivered sensitive topics such as racism in the US, this was highlighted through an expressive image that is horrible  and through a song : “Strange Fruit” 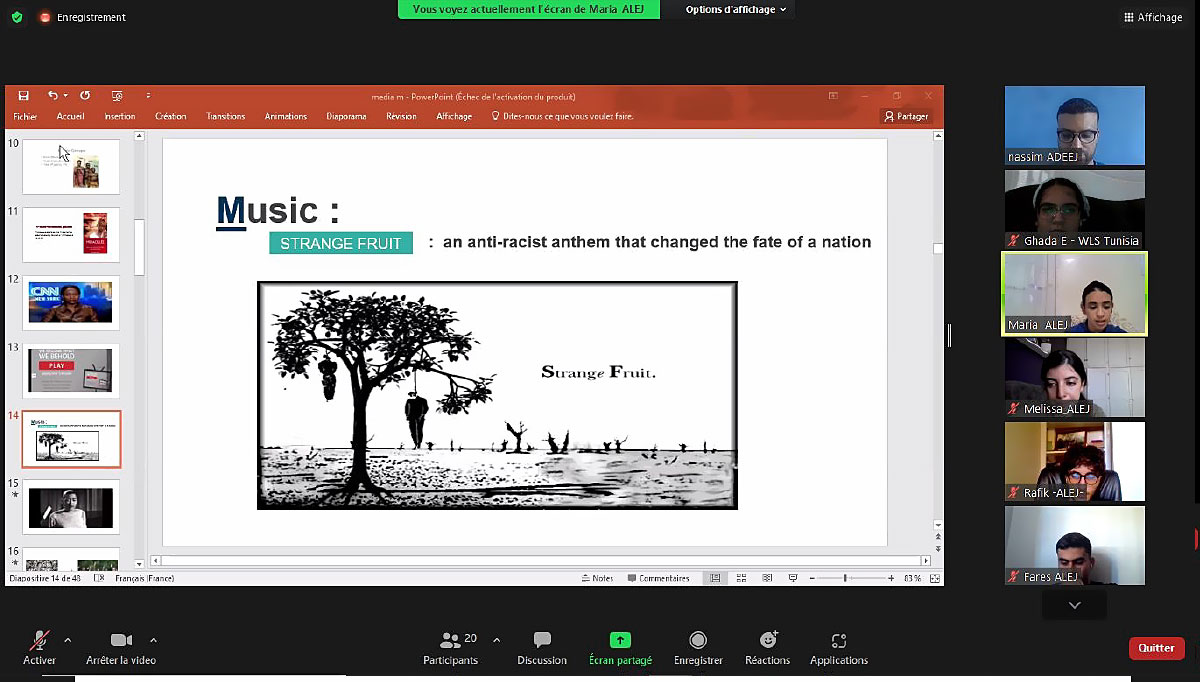 Melissa tackled the part of teenagers and children who are influenced by media and launched a discussion between participants to see their views in breakout rooms.

This was followed by Chanez’s confirmation about the dangerous imminent consequences of children and teenagers’ use of media.

As Melissa adds the fake news / types of information / and how we can protect ourselves from fake news:  The case of pandemic and how people think that China manufactured the virus that made them insecure all over the world.

Maria suggested a scientific and psychological version of the topic about “the science and power of persuasion” and how media used it.  Definition with statistics and images that showed the effect on the consciousness and vice versa was then introduced supported  by a game of illusion of how people see the image presented.

She also demonstrated Color Marketing: using colors to attract audience even by famous brands explaining that each color has a meaning in terms of impact and attraction.

The workshop was interesting and fruitful, it allowed the participants to talk more and interact with each other.It also shed light on the role of education in restoring the role of the media by enhancing methods and raising awarness about its intricate aspects.

This report was written by Farah, from the organization “We Love Sousse”. 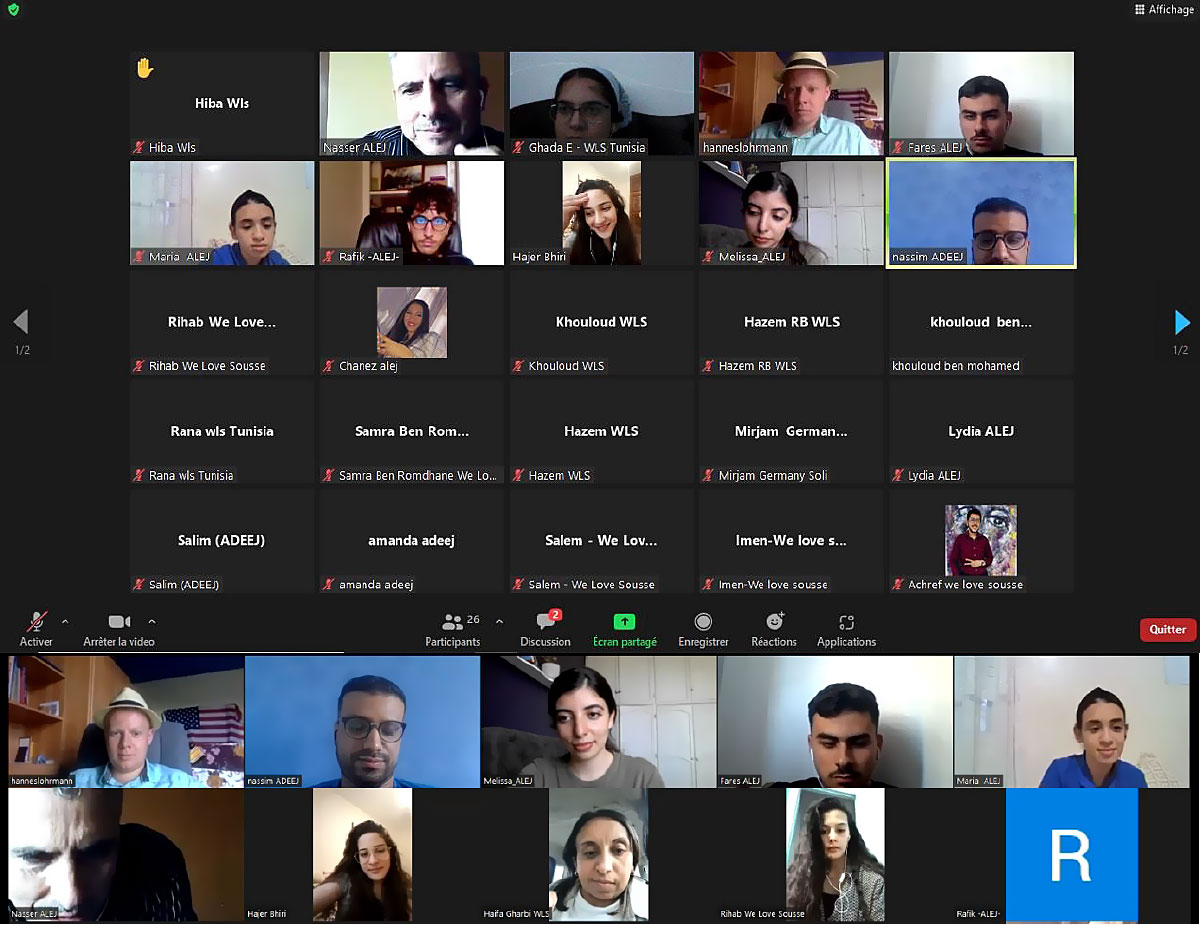 The project runs until the end of 2022 and is funded by the German Federal Foreign Office.