Exchange of professionals in Tunisia

From 13 to 18 December 2021, the coordination team of the project “Young Verified Leaders“ met in Sousse (Solijugend, ADEEJ and ALEJ from Algeria and We Love Sousse from Tunisia). The goal was to plan the upcoming workshops, to prepare our international youth encounters, to exchange about methods of non-formal child and youth work – and last but not least to finally get to know each other personally.

Despite great uncertainty due to the epidemic situation and despite rising infection rates, the professional exchange of “Young Verified Leaders“ in Sousse, Tunisia, could start on December 13, 2021.
We couldn’t wait to finally meet the project’s team-mates from Tunisia and Algeria face-to-face and spend the week together, spinning productive ideas and exchanging thoughts on possible working methods and the year ahead.
After a stopover in Lyon, we landed at 18:30 p.m. at the airport in Monastir, where Haifa Gharbi and some other members of “We Love Sousse“ (WLS) welcomed us very warmly.
Inside the car, Hiba, another member of the organization called us – very touched, almost euphoric that we had finally arrived. After an exhausting day, the enthusiasm and joy of the Tunisian colleagues was the most beautiful sign of recognition of our work of the last months.
Half an hour later we went to Sousse to our hotel, only a few meters from the sea and very close to the old town. Our Algerian partners, Nasser and Nassim, landed in Tunis in the evening and arrived at the hotel at midnight.

After two years without physical meetings and five months since the beginning of the Young Verified Leaders program, the entire organizing team (Nasser, Nassim, Haifa, Carolina and Adeline) and the members of WLS were finally able to meet face to face. After a sumptuous breakfast at the hotel, we met Haifa and Samra, who picked the German and Algerian delegations up at the hotel reception. At the same time, they were joined by our translator Lamine, who was to accompany the team for the week. His task was to translate from French into German during the work meetings and excursions.
The day started at the city gate “bab el gharbi“ and the visit of the Medina (Arabic word for Old City), which is part of the UNESCO World Heritage Site.
The organizing team of the YVL program and members of WLS then met at the café “Kasba“, over traditional Tunisian coffee, to further get to know each other personally and talk roughly about the upcoming program of the week. Afterwards we visited the museum “dar essid“ to learn about the historical Islamic way of life and to enjoy the Tunisian interior architecture. In the process, we learned a lot about the daily life, clothing and lifestyle of an Islamic family hundreds of years ago.
During our exchange of professionals, the festival “Voix des femmes“ (Voices of Women) was also held, organized and carried out by WLS members on a voluntary basis. Before lunch, we were invited to watch the short film “Aicha“ by Moroccan director Zakaria Nouri. The whole thing took place next to the museum “el Kobba“, where the members of WLS take care of children from financially weak families and support them regularly in the afternoon with sports and an educational program.
The lunch took place in a so-called “Maison d’hôtes“, a guest house where the owners of the house cook and serve culinary specialties to the guests themselves.
Afterwards we drove to the office of WLS, where the first project team meeting and the recording of a podcast was supposed to take place. The podcast was hosted by Iheb Helali and was intended to raise awareness of the Young Verified Leaders project. We were aware of the content of the planned audio recording, but no one had experience with recording a podcast. The good mood and hospitality of the moderator helped to create a very pleasant and entertaining atmosphere. Exhausted by the many impressions, we postponed another working meeting in the evening to end the day at the “Théâtre municipal“, the municipal theater of Sousse. There we witnessed a breathtaking performance of the newcomer singer Mayssoun Fatnassi, who truly lived up to the name of the festival with her wonderful voice.

Part of the YVL team during the visit of the Medina

With members of WLS at the museum after the film screening

The owner and cook of the Maison d’hôtes 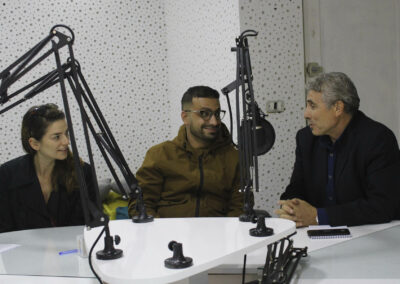 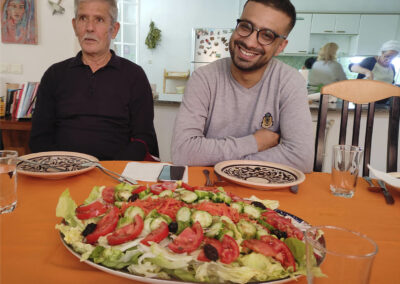 Lamine and Nassim at the appetizer 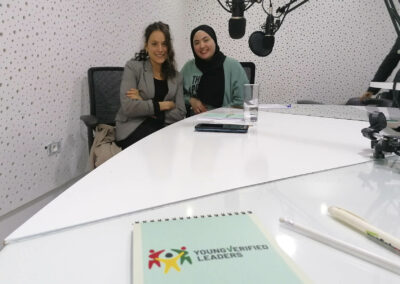 Adeline with the host Iheb Helali

On Wednesday, we learned to improvise together as a coordination team of “Young Verified Leaders“. From the beginning, one of the challenges of the meeting in Sousse was to “pitch“ the project to the Tunisian authorities, in other words, to present briefly and convincingly the objectives and the results already achieved. Haifa and her colleague Anis Boufrikha, founder of We Love Sousse, had been trying for weeks to organize an official meeting with the Minister of Youth and Sports. Given the minister’s busy schedule and the difficulty of arranging a meeting in such a short time, Haifa had warned us that the cabinet could call us at any time to reschedule or cancel the meeting.
On Wednesday morning, when the second working session with Samra, a representative of the WLS office, had begun and we were in the process of going through concrete ideas, Haifa informed that we were expected to meet the minister at 2 pm. Once transportation was arranged, the team drove to Hammamet, a town an hour north of Sousse. Between two presentations, the minister welcomed the Tunisian, Algerian and German delegations. As expected, we had less than half an hour to present the YVL project. The Minister also reported on the ongoing youth projects in Tunisia and formulated suggestions on how the YVL project could serve as a platform to the current activities. After some group pictures and a short but intense exchange, we drove back to Sousse to have our lunch at the restaurant “Treken“, which is located directly across the street from the WLS office. In addition to the many delicious meat dishes (chicken, shawarma, beef), there were also many vegetarian delicacies on offer: Ommek Houria, Slata meshwiya, Ojja, Tajine, Chakchouka, Tchich, Kafteji. At this point it is important to mention the traditional chillisause “Harissa“, which is served with most Tunisian dishes.
On the closing night of the “Voix de Femmes“ festival, the Belgian band “Yaya Bossa“ performed, which had been organized at short notice due to the cancellation of another band. Also, a jury awarded various prizes to the artists who had performed during the three days of the festival.
Meanwhile, our Algerian partners were watching the semi-final Algeria vs. Qatar and were already disappeared. 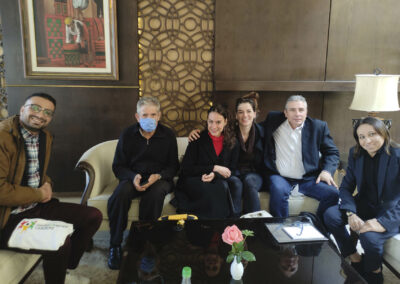 Working meeting with project partners shortly before our departure to Hammamet

The initiators of the Young Verified Leaders project in conversation with the Minister of Youth and Sports in Hammamet. 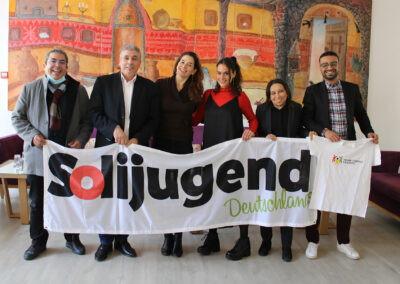 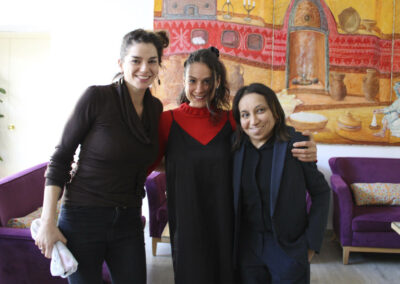 Carolina, Adeline and Haifa after the meeting with the minister

The Minister of Youth and Sports with Nassim and Nasser 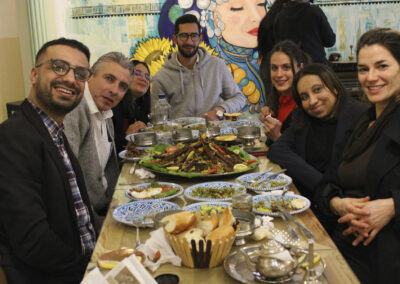 A well deserved lunch break in the restaurant Treken 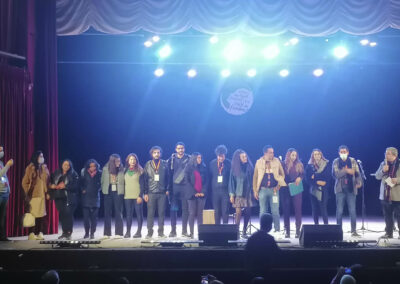 The entire WLS team at the closing night of the Voix de Femmes festival.

The day started with a third working group meeting. In the planning phase we (Haifa, Nassim, Nasser, Carolina and Adeline) had divided the different task areas between our four organizations and on Thursday the part to be presented was worked on by the Algerian colleagues, Nassim and Nasser.
After two intense hours of work, it was time for a traditional window shopping in the old town. We were joined by Farah, who helped us not only to find our way around the narrow streets of the old town, but also to negotiate prices with the local vendors and craftsmen.We spent lunch at a snack bar with freshly squeezed juices and “makloub“, a delicious Tunisian sandwich.
In the afternoon, the YVL team was received by the director of the first Tunisian youth house, (“Maisons de Jeunes”) in Riadh in Erriadh, a district of Sousse. Here we discussed the specifics of such an institution and a possible collaboration in the project.
To end the day in an informal setting, we met again in the afternoon with the members of WLS at Café Don Pablo for coffee and extremely sweet “Chocolat Chaud“, got to know each other again in a completely new way and talked about possible strategic approaches in the project. 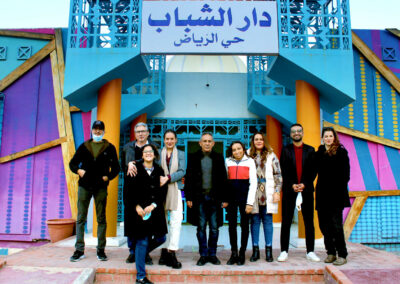 Like the previous day, Friday started right after breakfast with the last working group meeting of the week. In the afternoon we visited the ruins of the amphitheater of El Djem, located about an hour away from Sousse, with members of WLS. El Djem is the best-preserved amphitheater in North Africa and, like the medina, has been a UNESCO World Heritage Site since 1979. It is known for its exceptional acoustics. The original plan was to visit Bourguiba’s presidential palace in Monastir afterwards, but the unpredictability of the day decided otherwise. On the way back, several sections of highway were closed, forcing our drivers to take dirt roads, taking us once through half of Tunisia. Once in Monastir, the whole group stopped at the port for coffee, as the palace was closed. Although we spent most of the day in the car, we were able to talk extensively with the young people from WLS and also get to know their taste in music, which accompanied us on long hours of driving.
Finally arrived at the hotel, Haifa and other members of WLS were waiting for the rest of the group. In the evening, two members of WLS took us to a concert where we spent our last evening together. 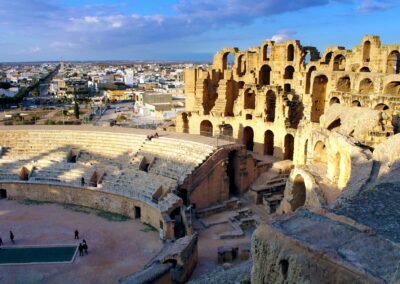 The grandiose ruins of the amphitheater of El Djem 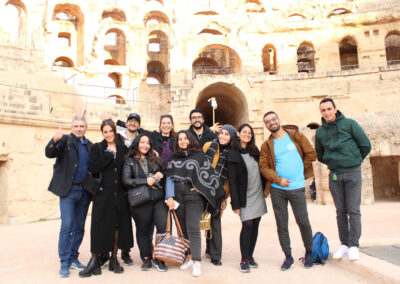 The YVL team in the amphitheater of El Djem

At 10:00 a.m. Haifa was waiting in the hotel lobby to say goodbye to us. Our Algerian friends Nasser and Nassim drove directly to Tunis. Carolina was driven to the airport at 12:00 and Adeline added a few more vacation days to the work meeting.
The exchange of professionals in Sousse was the first activity of the YVL project in presence and we hope that it was only the first of many more to come.
We would like to take this opportunity to thank the entire We Love Sousse team, from Haifa and Anis to every single member who accompanied us during this week. Despite all the unexpectedness on time and in regard to the pandemic, the team of WLS was very flexible, always there for us, and each*person was very attentive to our needs and concerns during the project meeting. We would also like to thank our Algerian partners Nassim and Nasser for their inspiring collaboration and commitment to meet together in Tunisia.
Besides a very dense program and various exciting working groups, we had the opportunity to get to know each other better, but this time not hidden behind a screen, thousands of kilometers away. In particular, we appreciated the informal discussions with the coordination team of ALEJ, ADEEJ and WLS. These helped not only to better identify the diverse views, but also to meet more in person. A project of this scale and with so many intertwined intercultural levels can only succeed sustainably if everyone is given the space to develop and feel comfortable. Only in this way can we convey the values that are so central to us and foster interpersonal relationships between partners and our members. We remain firmly convinced that communication at eye level and mutual trust are the main elements of our cooperation. For us, this is one of the most important foundations for immediate program success. We feel confident that we are ready to meet the challenges and are already looking forward to the next steps of action in the coming year!

The project runs until the end of 2022 and is funded by the German Federal Foreign Office.